Review: THE ART OF BEING NORMAL by Lisa Williamson 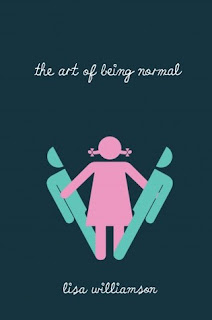 Synopsis: Two boys. Two secrets.
David Piper has always been an outsider. His parents think he’s gay. The school bully thinks he’s a freak. Only his two best friends know the real truth – David wants to be a girl.
On the first day at his new school Leo Denton has one goal – to be invisible. Attracting the attention of the most beautiful girl in Year 11 is definitely not part of that plan. When Leo stands up for David in a fight, an unlikely friendship forms. But things are about to get messy. Because at Eden Park School secrets have a funny habit of not staying secret for long . . .

Review: The Art of Being Normal is by far one of my favourite books. Written from the perspective of two teenagers the storyline looks at every day issues that at some point everyone faces while at school. What makes this book that little bit more interesting is the fact that it looks at what it is like to be transgender. A subject that many people have no idea about but is oh so real for others.

You spend the first half of the book getting to know David Piper and Leo Denton. It felt like this took a long time to do, as you spend at least half the book learning about the characters before anything really happens. However, it is worth the wait. The second half the book really gives the reader something to get your teeth into, with an amazing plot twist that you simply just don't see coming. You really start feeling for the characters.

My only major issue with the book is that the book started off with David Piper as the main character but the book quickly switched to Leo Denton being the main focus. Which was a little frustrating as you settle into the book slowly building a picture of it when it suddenly flips. Having said that, I still believe this is a must read book.

If you are a reader that is interested in LGBTQ+ then this is a perfect book. If you're not then this is still a wonderful read.