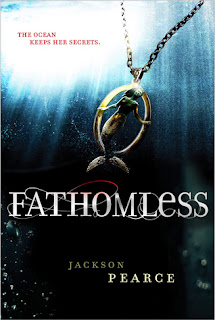 Synopsis: Celia Reynolds is the youngest in a set of triplets and the one with the least valuable power. Anne can see the future, and Jane can see the present, but all Celia can see is the past. And the past seems so insignificant -- until Celia meets Lo.

Lo doesn't know who she is. Or who she was. Once a human, she is now almost entirely a creature of the sea -- a nymph, an ocean girl, a mermaid -- all terms too pretty for the soulless monster she knows she's becoming. Lo clings to shreds of her former self, fighting to remember her past, even as she's tempted to embrace her dark immortality.

When a handsome boy named Jude falls off a pier and into the ocean, Celia and Lo work together to rescue him from the waves. The two form a friendship, but soon they find themselves competing for Jude's affection. Lo wants more than that, though. According to the ocean girls, there's only one way for Lo to earn back her humanity. She must persuade a mortal to love her . . . and steal his soul.


Review: I really wanted to love this book but sadly I simply liked it. I loved Sweetly and Sisters Red and would strongly suggest reading these two beforehand as there are small links between them.

Fathomless took its time to get going with the first 200 pages building the storyline, which only left 100 pages for the action to really get going. Which is fine, nothing wrong with that. Except expecting there to be an amazing ending led to somewhat an anticlimax.

The book is written from the perspective of two characters and if you've read the previous books in this series it's what you expect. I found the character of Celia easier to love than Lo. Lo was too shrouded in mystery for far too long for me to grow attached to her, and by the time I did the book was almost over.

Overall Fathomless was a good read, but not a book I would class as a must-read.