Review: THE UNEXPECTED INHERITANCE OF INSPECTOR CHOPRA by Vaseem Khan 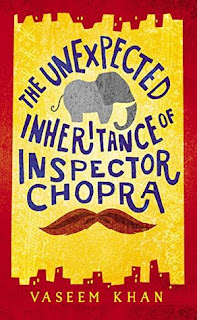 The Unexpected Inheritance of Inspector Chopra by Vaseem Khan

Synopsis: On the day that he retires Inspector Ashwin Chopra inherits not one but two unexpected mysteries. The first is the case of a drowned boy, whose suspicious death no one seems to want solved. And the second is a baby elephant. As his search for clues takes him across the teeming city of Mumbai, from its grand high rises to its sprawling slums and deep into its murky underworld, Chopra begins to suspect that there may be a great deal more to both his last case and his mysterious new ward than he has at first thought. For when the going gets rough, a determined elephant may be exactly what an honest man needs . . .

Review: I wasn't sure at first about reading this book because I heard it was similar to The No.1 ladies Detective Agency by Alexander McCall Smith which wasn't my favourite book, but I am now glad I read it anyway.

I really enjoy the fact this was set in Mumbai and loved the fact that it featured my favourite animal, an elephant. How can you not fall in love with a baby elephant who saves the day? He really is the unlikely hero.

Unlike the The No.1 ladies Detective Agency, The Unexpected Inheritance of Inspector Chopra has a few running main story lines. I feel you can really get into the characters and mystery involved.

The only fault I can find with this book is that every now and again the book would reference something Indian I have no idea about. I would have to look a couple of things up to understand. Luckily this didn't happen too often and it didn't effect the over all plot.

I loved the ending of this book. It really got to grips with some of the nice parts of India. Far to often we see plots that portray a negative image of a beautiful country. The Unexpected Inheritance of Inspector Chopra restores your faith in good coming out on top.

The very end of this book contains a preview of the next one which will be out in May 2016. Better put that one on the calendar!

Such a good read for anyone who loves crime, India or elephants.
Posted by Bananas for Books at 12:55 1 comment: 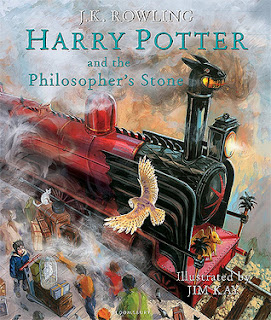 Harry Potter and the Philosopher's Stone by J.K. Rowling.
Illustrated by Jim Kay

Synopsis: Prepare to be spellbound by Jim Kay's dazzling depiction of the wizarding world and much loved characters in this full-colour illustrated hardback edition of the nation's favourite children's book – Harry Potter and the Philosopher's Stone. Brimming with rich detail and humour that perfectly complements J.K. Rowling's timeless classic, Jim Kay's glorious illustrations will captivate fans and new readers alike.

When a letter arrives for unhappy but ordinary Harry Potter, a decade-old secret is revealed to him that apparently he's the last to know. His parents were wizards, killed by a Dark Lord's curse when Harry was just a baby, and which he somehow survived. Leaving his unsympathetic aunt and uncle for Hogwarts School of Witchcraft and Wizardry, Harry stumbles upon a sinister mystery when he finds a three-headed dog guarding a room on the third floor. Then he hears of a missing stone with astonishing powers, which could be valuable, dangerous – or both. An incredible adventure is about to begin!

Review: I have truly fallen in love with this book! I have only read (or rather my mum read to me) the first three Harry Potter books, but that was so long along when I was really young. It's about time to read the books properly and what better way to do it than with this beautiful illustrated version?

Jim Kay really did the magic of the story justice. I loved how he managed to make his own mark on how he pictured the characters. For anyone who has seen the films there is all ways the risk that reader will want the images to match the picture they have of characters from. This book manages to bring the characters to life without just sticking to these, you can really love each character again.

I really hope that they bring out the rest of series in this edition. If you have read Harry Potter before I would suggest reading this one as it brings the magic alive all over again. For those who haven't then you are in for a treat! Potter heads are going to love this. 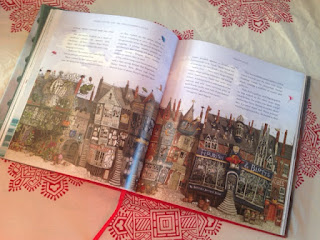 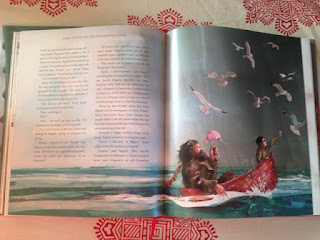 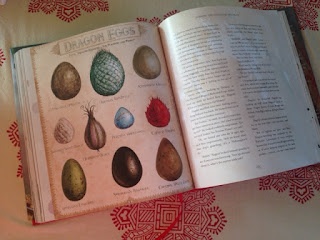 Posted by Bananas for Books at 13:02 No comments: