Review: IN THE DARK, IN THE WOODS BY ELIZA WASS 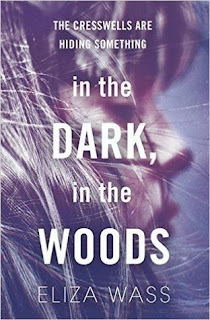 In the Dark,  in the Woods by Eliza Wass

Synopsis:
IN THE DARK

Father wants sixteen-year-old Castley and her five siblings to hide from the world. Father wants to bury their family's secrets where no one will ever find them.

Father says they are destined to be together for ever. In heaven. Father says the sooner they get there the better. But Castley wants to be normal. She wants to kiss boys and wear jean shorts.

Review: There are few good points that I can think of for In the Dark, In the Woods. The plot seemed to have so much potential which didn't go very far. It was also very easy to find many plot holes.

This was a quick one to read, which I am thankful for as I really didn't enjoy it.

The main character was fine I liked her. However the adult characters in the book just made me so mad! The mother seemed to do nothing to help the poor children and get them away from such an awful father. I don't want to judge people in real life who find it hard to get away from these types of situations, however there wasn't enough depth given to her character that explained why she couldn't or wouldn't help.

The father is meant to be hated. That is fine, every story needs someone or something we hate.

The plot line where the neighbour turns out to be an uncle? Now that really did feel forced just to give the story a happy ending. I really felt this was going to go somewhere interesting. It didn't. We discover something quite major which was then dropped and not really mentioned again until the very end when the children went to live with him. It felt like the author just wanted a way to keep the children from being split up and put into care. I'm all for happy endings, just not when they are so clearly forced.

Are you really telling me that the whole family managed to get as far as they did without any adult thinking something odd was going on?  Scary things can and do happen in real life like this, but with the children being known around the town, going to school and an uncle knowing all about the family, could it have been that easy to do?

I was so disappointed with this read. It started with so much potential.